The Japanese are still prolific smokers despite statistics showing the number of smokers is at an all time low. Cigarettes are still very cheap and very easily accessible with vending machines and Tobacco shops on every street corner and 5 or 6 in between. 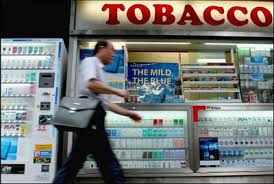 Coming from NZ where smokers are all but banned from any public place and made into social pariahs I am constantly amazed at the smokey haze still to be found in public places, bars, restaurants and  some work places.

Most restaurants offer a smoking area. This is more often than not not sealed off in any manner. It is often larger than the Non smoking area. I have to laugh if not gag and go into an asthmatic paroxysm when I am shown to the one non smoking table is right next to the 10 smoking tables. It seems that the theory behind a non smoking section is not about a smoke free environment  but rather this is a table that are physically not allowed to smoke at and the one next to it allows you to smoke.

I frequent a coffee shop most mornings before work which does have a very nice smoke free environment. They have a smokers room but it is well sealed  and seems to have reasonable extractor fans so the smoke does not leach out as people come and go. I was surprised to find the place to be very smokey and hazy one morning.  I was informed they were doing work on the smoking room so non smoking area was being commandeered and designated a smoking area for that day. Huh?????? the logic behind this confounded me. They had more seats in the non smoking area so surely they have more non smoking customers. There is always a queue for a non smoking seat yet the smokers can usually get a seat first pop. They didn’t think to ask the non smokers to refrain from smoking. They not only lost my patronage for the day the repairs took but for 2 weeks as it took that long to get rid of the smokey smell.

I work at a high school. Smoking is no longer permitted in the staffroom, however there is a smoking room and teachers do frequent it frequently. The office area is very smokey as the owner of the school is a smoker. There is a a “smoking area” which doesn’t really serve any purpose in terms of containing the smoke as the office is open plan.

Where the emphasis in NZ is very much health related and aimed at encouraging people to quit or better yet not even start because of the numerous health related issues it seems that Japan seems to be more concerned about the litter problem that butts can cause! There is also an issue of good manners and not putting other people out but the issue of Cancer, child health, the effects of  second hand smoke and the work place rights don’t seem to feature majorly. Health warnings like home in the form of gruesome pictures are not to be seen. Tv campaigns are non existent.

If anything smoking is still encouraged and portrayed as stylish, clean and responsible as long as you don’t litter. 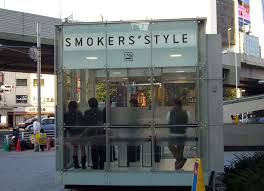 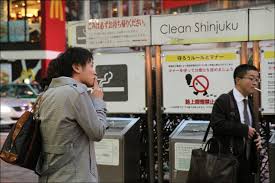 The following are  series of very funny public warnings about smoking etiquette. At first I thought this was an anti smoking campaign but as I looked into it further it actually seems to be about smokers getting a bad reputation as litter bugs and how to address that. It also seems to infer there are certain smoker manners that should be followed. This seems to be a “Miss Daisy guide to smoker etiquette in Japan”  There is a slight lost in translation factor here, however I find that it is overridden by the WTF?????? factor. It must be cultural because the wording of the translations is correct in a direct form. I keep thinking in there some inferred meaning I am missing here, you know something along the lines of “smoking is bad for your health”. Should the translator have used a little more poetic licence when translating but whatever way I come at it I can’t get past the WTF ?????? factor

Is this an advert for ‘Kids don’t try this at home”? A Ciggy butt hardly seems to be a flaming object???? Now I would be scared if a Molotov Cocktail was biffed out the window of a moving vehicle  and tossed into my path. It’s not a fire warning ad. It’s not notice that an action film is being shot so stay off the road. Seems to be an anti littering ad rather than a kick the habit one

While Ciggy butts in the snow is not a nice thing I would be more concerned if someone was upended and planted in the snow. This may not lead to cancer but hell it could cause suffocation! And the snowman????? Hey smoke around your kid, at home , in the car, while supervising him making a snowman BUT don’t set a bad example by sticking your butt in the snowman because that is dirty. It is  unacceptable littering.

While the Cosplay world ( that’s another post) is alive and well in Japan, I have yet to see a Japanese cowboy with his smoking gun or ciggy dangling from the side of his mouth in true Clint Eastwood style, let alone littering. I guess this one is not about your dress sense but yet again seems to be  saying “littering ain’t cool partner but smoking sure is” 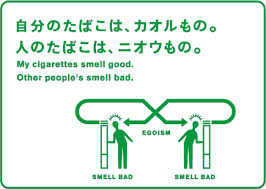 I’m not sure they get the point here? In most of the world the problem is smokers and the possibility that second hand smoke can cause health related issues for people who chose not to smoke. Smell is not usually a major issue between 2 puffers? Are they suggesting we have enforced distances between smokers so they don’t cause each other discomfit?

We seem to be moving from littering to the issue of personal space. Again the suggestion seems to be it’s okay to smoke but be aware of your surroundings. Avoid stubbing your ciggy out on unsuspecting peoples’ bare arms. Of course baring your arms is just asking for sunburn, skin cancer and dengue fever bearing mosquito bites. Maybe people should consider covering up. Bare arms can be detrimental to your health! 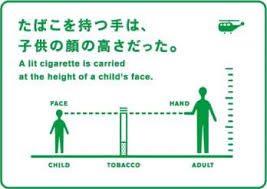 Another personal space warning? You could easily burn a child’s eyeballs out if you smoke to close to him!!!!! Think about this!!!!!! Oh and while you are at it have you considered the effects of second hand smoke on children?

Acknowledging that not all people like smoke, but yet again not suggestion that there are health issues, Just maybe a subtle suggestion that smokers should smoke in designated areas, be aware many people don’t like smoking but go ahead, oh and you may have problems getting a date as smoking is not attractive to many people. 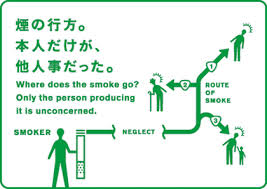 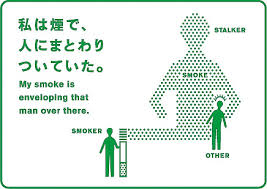 This one seems to sum it it up nicely. It says to me “our whole campaign is a waste of time! keep smoking, litter as much as you want, others don’t really matter ”

As I said I was left rather  baffled at this whole campaign, Was it a cultural misunderstanding on my part? I guess I am used to very hard hitting media messages regarding the detriment of smoking and the hard push to encourage people to quit. Medical professionals I have talked to have commented on the high rate of smoking related cancers in Japan and yet there seems to be no anti smoking campaign, rather one that is merely trying to merely educate smokers in socially acceptable smoker etiquette in other words it is trying to promote smoking by making it seem less obnoxious.. When I say socially acceptable, I mean in Japan. It seems to be saying smoking is fine as long as you do it right. Don’t litter and keep enough distance that you don’t physically maim a person or damage their clothes. There seems to be no message about the possible health issues involved with smoking.  Maybe there is no anti smoking sentiment in Japan at all? These messages are everywhere in all the stations, on public transport and on the streets.  This is just a sample exhibit, yep there are more!

Suddenly it became clear. Cultural break through? nope! An ephinany? Nope! In depth understanding of the Japanese psyche? nope nothing so meaningful. Comes down to marketing and yen. These little gems were put out by Japan Tobacco.