I will be showing 5 photos uncropped straight from the camera.  Simply comment on at least two of the photos explaining in detail what is right and wrong about these photos. – Cee Neuner, Compose yourself Weekly Challenge

This wee task was a tricky one! I am a great admirer of Cee’s Blog and the wonderful challenges that she runs. She is one of my muses and blogging role models and as far as I am concerned can do no wrong!

However, critiquing is a different thing than criticising and one of the things I love about these challenges is that everyone has a different take on them and there is no wrong! Photos too are like that. We can all see different things in a shot and each person will approach it in a different way.

Here is my take on two of Cee’s photos. I just dived in and used a basic version of the Google App Pic Monkey ( Did you know that this year is the Year of the Monkey under the Chinese 12 year Zodiac?) to crop in different ways. Some worked and some didn’t.

Photo One “Umbrellas against a wall”

To me, this is a picture of red umbrellas leaning against a wall. I like the burst of red against the pale colours of the wall and the footpath, I like the lines in the footpath and the white wall and I like the fact that the umbrellas are standing up accentuating the length of them.

I decided immediately to crop out the small piece of diagonal drain in the bottom left corner. Although it has a pretty pattern it is entirely superfluous to the picture as the title I would give this shot is “Umbrellas against a wall”

I decided to take the doorway out for two reasons. Firstly it is not needed and secondly, I want to keep the colour palette simple with the emphasis on the red. I felt the dark tiles lead away from the umbrellas.

Here are my cropped versions 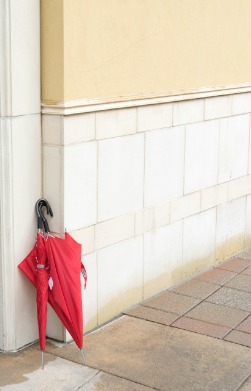 In both photos, I took out the dark colours of the door and the drain. I like that the palette has been simplified. I was trying to emphasise the length of the umbrellas. Of the two pictures, I like the one on the right the best. I feel having slightly less footpath leads the eye to the umbrellas more directly and the umbrellas seem longer. The photo on the left has too much wall and this takes away from the umbrellas.

Looking at these two versions, I decided to simplify one step further. My final effort was my favourite.

“Umbrellas against a wall”

It is simple, clean and crisp. The red pops. The line of umbrella goes with the wall and I like how the wall lines run into the footpath lines creating that nice right angle perspective.

The first two things that jumped out at me were the chairs and the pastel colours. I instantly wanted to crop out the brown box on the left and the brown chair on the  right.

I initially thought I wanted to crop out the reflection of the car too and here is the cropped result. 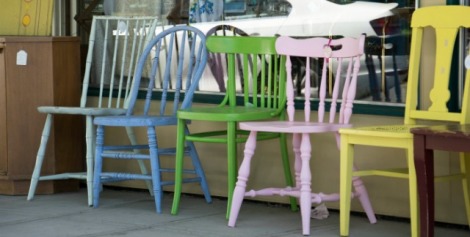 I don’t like the brown chair on the right and wanted to see want the picture would look like without the box on the right.

Taking the brown chair out was an improvement but loosing the light blue chair on the left didn’t seem right. 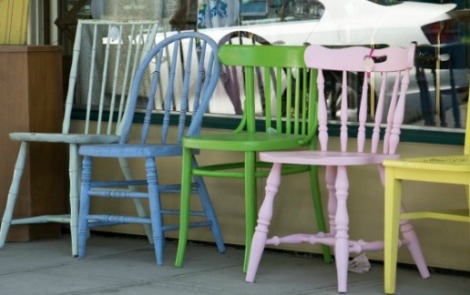 Of the three photos, I like this the best, I kept the whole of the light blue chair on the left. the box without the tag and cropped doesn’t seem so invasive. I get the sense of length and five pastel chairs even if the yellow one is only a partial shot.

After looking  at three cropped versions I wondered about leaving the car reflection in. It is a nice juxtaposition of antique versus modern, sedentary versus mobile and the white fits in with the pastel palette.

I started with a similar chair crop including the brown box but because the shot is higher to include the car it also includes the 70’s’ type painting in the top left which I find distracting.

Of the three shots with the Car reflection, I like this best. I think by taking out the legs on the left and right, the photo is centred on the three chairs which leads to the reflection behind.

Thank you Cee! This was a true challenge.